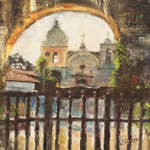 This section of St. Paul’s letter to the Ephesians is chock full of both admonishment and encouragement.  He gives the Christians to whom he is writing specific behavioral guidelines which have their foundation firmly in the history and prophecy which we find in the Old Testament.  The central teaching upon which he draws is the revealed Law of Life itself, the relatively brief guidelines given to Moses for the people of God, the Ten Commandments (see Exodus 20:1-20; Deuteronomy 5:6-21). Any other specifics grow out of this primary revelation of how things are, of what it’s all about, the revelation which makes it absolutely clear to human beings just what leads to our death and what, mercifully, leads to life– even eternal life for which we were all created by God.

Pope Francis has a wonderful teaching about the purpose and meaning of the Ten Commandments which Magnificat used recently as a Mass meditation (March 26) and which is worth reading slowly and prayerfully before we plunge into this week’s verses in Ephesians:  The Ten Commandments are not a limitation, but an indication for freedom….The Ten Commandments are a gift from God.  The “commandment” isn’t fashionable.  To today’s persons, it recalls something negative, someone’s will that imposes limits, that places obstacles to our lives….Unfortunately history, even recent history, is marked by tyranny, ideologies, mindsets that have been imposed and oppressive, that haven’t sought the good.  The Ten Commandments, however, come from a God who created us out of love, from a God who established a covenant with humanity, a God who only wants the good of humanity.  Let us trust in God!...

The Ten Commandments show us a path to travel and also constitute a sort of “moral code” for building just societies that are made for men and women.  How much inequality there is in the world!  How much hunger for food and for truth!  How much moral and material poverty resulting from the rejection of God and from putting so many idols in His place!  Let us be guided by these Ten Words that enlighten and guide those seeking peace, justice, and dignity.

It is important to remember when God, through Moses, gave the people of Israel the Ten Commandments.  At the Red Sea the people had experienced great deliverance.  They had seen firsthand the power and faithfulness of God, the God who liberates.  Now God himself, upon Mount Sinai, indicates to His people and to all of us the way to remain free, a path that is engraved upon the human heart as a universal moral Law.  We shouldn’t see the Ten Commandments as restriction upon our freedom; no, not that way.  We should see them as signs for our freedom….They teach us how to avoid the slavery to which the many idols that we ourselves build reduce us…They teach us to open ourselves to a wider dimension than the material one; to live with respect for others; overcoming the greed of power, possessions, and money; to be honest and sincere in our relationships; to protect all of creation and to nurture our planet with high, noble, and spiritual ideals.  Following the Ten Commandments means being faithful to ourselves, to our most authentic nature, and walking towards the true freedom that Christ taught us in the Beatitudes (see Matthew 5:3-12 ff)  –Libreria Editrice Vaticana, June 10, 2013

“How much hunger for…truth!”  And St. Paul begins this section of his letter by quoting a great Old Testament prophet of the coming Kingdom of God, Zechariah, who prophecies (in about 500 BC) under the inspiration of God: “Thus says the Lord, ‘I will return to Zion and will dwell in the midst of Jerusalem.  Then Jerusalem will be called the City of Truth…And the streets of the city will be filled with boys and girls playing in its streets…I have again purposed in these days to do good to Jerusalem and to the house of Judah.  Do not fear!  These are the things which you should do: speak the truth to one another; judge with truth and judgment for peace in your gates.  Also let none of you devise evil in your heart against another…”   (Zechariah 8:3,5,16,17)  Paul says, “Therefore, laying aside falsehood, speak truth, each one of you, with his neighbor, for we are members of one another.  Be angry and yet do not sin; do not let the sun go down on your anger, and do not give the devil an opportunity.”  (verses 25-27)

And there is something extra, something really unexpected through which the Kingdom has begun already to come, in fulfillment of Zechariah’s prophecy:  “…do not grieve the Holy Spirit of God, by whom you were sealed for the day of redemption…be kind to one another, tender-hearted, forgiving each other, just as God in Christ also has forgiven you…for you were formerly darkness, but now you are light in the Lord; walk as children of light.”  (Ephesians 4:30,32;  5:8)

The something extra which the great prophets could not see in its fullness was the outpouring of God’s Holy Spirit, the life and power of the Lord himself enabling Christians to be transformed into Kingdom people, into the new temple of God and body of Christ on this earth.  Because of this reality, Paul can exhort the Ephesians, “…you were formerly darkness, but now you are light in the Lord; walk as children of light (for the fruit of the light consists in all goodness and righteousness and truth), trying to learn what is pleasing to the Lord.” (Ephesians 5:8-10)

Obviously, Paul is speaking of an ongoing process of growth in holiness here, and in the following verses and chapters we will come to understand with greater clarity just what that process entails in our life together on this earth.  “Do not think that I came to abolish the Law or the Prophets,”  Jesus said in Matthew 5:17, “I did not come to abolish but to fulfill.”

Thanks be to God!  JC